The first former child soldier to go on trial at the ICC, and the first member of the LRA to face justice there.

“I am here today to bear witness to a special day for the victims in Northern Uganda, it is the moment that they have been waiting and hoping for, for many years. The victims are present in the courtroom in The Hague through their legal representatives, and the Court is present in the field with the victims.” Herman von Hebel, ICC Registrar.

Dominic Ongwen, a former senior commander from the Lord’s Resistance Army in Uganda, was abducted somewhere around the age of 10-14. Once abducted, he was tortured and forced to watch violent killings and subsequently indoctrinated as an LRA child soldier. He rose through the ranks to become head of one of the four LRA brigades and now stands accused of multiple war crimes and crimes against humanity. In 2015 he gave himself up, apparently fearing death at the hands of his commander. His trial begins today December 6, 2016, at the International Criminal Court in The Hague. The charges will be read, followed by opening statements, followed by adjournment until January 16, 2017.

The trial’s opening started with the reading of the charges against Mr Ongwen, who pleaded not guilty. The trial will resume on 16 January 2017.

The LRA committed atrocities against civilians for nearly three decades. They abducted tens of thousands of children for use as soldiers and sexual slaves, and killed and maimed thousands of civilians in remote regions of northern Uganda, northeastern DRC, South Sudan and the Central African Republic.

As alleged former Commander in the Sinia Brigade of the Lord’s Resistance Army (LRA), Dominic Ongwen is accused of 70 counts of war crimes and crimes against humanity related to attacks against the civilian population in the former IDP camps of Lukodi, Pajule, Odek and Abok between October 2003 and June 2004, including: attacks against civilian population; murder and attempted murder; rape; sexual slavery; forced marriage; torture; cruel treatment of civilian and other inhumane acts; enslavement; outrage upon personal dignity; conscription and use of children under the age of 15 to participate actively in hostilities; pillaging; destruction of property and persecution. It is further alleged that from at least 1 July 2002 until 31 December 2005, Dominic Ongwen, Joseph Kony, and the other Sinia Brigade commanders were part of a common plan to abduct women and girls in northern Uganda that were then used as forced wives and sex slaves, tortured, raped and made to serve as domestic help; and to conscript and use children under the age of 15 to participate actively in hostilities in the LRA.

This is an unusual trial. Court efforts to make it accessible to those affected include “viewing sites” in the four locations in northern Uganda where the alleged crimes occurred, as well as in Gulu, the largest town in the region, and Coorom, the area near where Ongwen is from. The ICC will bring local community leaders from Uganda to The Hague to observe the opening. More than 4,100 people are “victim participants”. Victim participation at the ICC allows victims to contribute to the proceedings separately from testifying as witnesses. Participation may include questioning witnesses and making submissions on legal and factual subjects.

The ICC Registrar travelled earlier this week to Northern Uganda to mark the opening of the trial with the victims’ community of Abok. Prior to the opening, he met with local leaders, elected leaders and participating victims to discuss aspects of supporting the trial, including the protection of witnesses and engagement of  local communities.

Ongwen’s status as a former child soldier may be relevant to his legal defence, even though the crimes he is charged with were committed as an adult.

Justice and accountability can reach, eventually, into the most difficult places and situations. If only the people who created Dominic Ongwen, or what he became, could also be tried.

You can follow proceedings of the International Criminal Court at:

and today, as March begins, the proceedings continue: 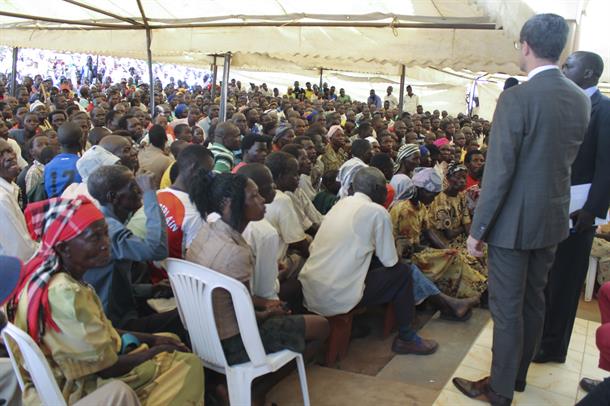 More than 2,000 non-Iraqi ISIS suspects detained in Syria by Western-backed Syria Democratic Forces may soon be transferred to Iraq for prosecution, since most of their countries are refusing to […]
Justice in Iraq
%d bloggers like this: