Cluster Bombs – are they banned or not?

We are hearing about the extensive use of cluster bombs in Syria, and now in Yemen. The annual meeting of parties to the international treaty banning cluster munitions, on September 7 2016, condemned the continued use of these weapons. The United States did not attend the meeting. Who has agreed to ban the cluster bomb? Who hasn’t?

What is a Cluster Bomb?

A cluster munition, or cluster bomb, is a weapon containing multiple explosive submunitions.

Cluster munitions open in mid-air to release tens or hundreds of submunitions, which can saturate an area up to the size of several football fields.
Cluster munitions are unable to distinguish between civilians and combatants. They also leave behind large numbers of dangerous unexploded ordnance which persist for years and decades after use. Sixty per cent of cluster bomb casualties occur while the victim is undertaking their normal activities.

In his speech to a roomful of students and politicians in Laos in October, at which he promised massive additional US funding to clear unexploded ordnance, President Obama said, “Given our history here, I believe that the United States has a moral obligation to help Laos heal.” The CIA led a bombing campaign during the Vietnam War, which dropped more than 270 million cluster bombs on villages and suspected Viet Cong supply routes in Laos (a neutral country) from 1964 to 1973. More bombs than dropped on Germany and Japan combined during World War II. It’s estimated 80 million never went off, and dozens of Laotians die each year from these still. This is the ongoing human cost of cluster bombs. 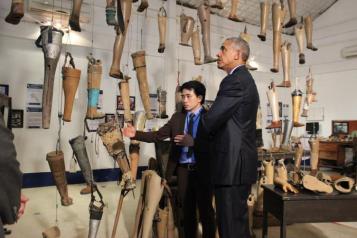 Since 2010 cluster bombs have been used in Lebanon, Syria, Yemen, Sudan, Cambodia and Libya. These more recent conflicts differ from the Vietnam war in that since 2008 there has been a strong international consensus, backed by a treaty, that would like to see these weapons outlawed for good.

The Convention on Cluster Munitions was signed in 2008 and prohibits all use, production, transfer and stockpiling of cluster munitions. Its full text can be accessed here. For those countries who have signed the treaty the terms are binding, they cannot use, manufacture or stockpile cluster bombs. 119 states are current signatories.

UNODA (The UN Office for Disarmament Affairs) state that The Convention (on Cluster Munitions) became binding international law when it entered into force on 1 August 2010 after 30 States had ratified it. However whilst numerous governments, as well as the UN have condemned the use of cluster munitions in the past year in Syria and in Yemen, some large and notable countries are unwilling to sign the treaty, including Russia, China, USA and Saudi Arabia.

The Cluster Munitions Coalition  state that 34 countries have produced cluster munitions since the end of World War II. 16 of these are still believed to produce cluster munitions or reserve the right to do so. The other 18 have stopped producing the weapon.

The UK is a signatory to the treaty and we neither make, store nor supply them, but some of our old bombs are still out there. On December 19th 2016 the use of UK made cluster bombs by the Saudi coalition was discussed in Parliament.  Michael Fallon UK Secretary of State for Defence, December 19th UK House of Commons Parliamentary Debate  stated that “The UK signed the convention on cluster munitions in 2008 and has not supplied any such weapons to Saudi Arabia since 1989.” The Saudi Arabian coalition confirmed that same day that a limited number of cluster munitions that were exported from the UK in the 1980s were dropped in Yemen, and confirmed it would not further use British made munitions. It doesn’t need to – it now buys them from Brazil. The Saudi coalition members are not parties to the convention, and say that the munitions were used against a legitimate military target and did not therefore contravene international humanitarian law. Saudi Arabia has now confirmed that it will not further use British cluster munitions.

What is the UN’s position on cluster bombs?

In 2015 United Nations General Assembly adopted a non-binding  resolution entitled “Implementation of the Convention on Cluster Munitions” by a vote of 140 in favour. Russia and Zimbabwe voted against. 40 states abstained, including the US.

What is the US position on cluster bombs?

The US  explanation for its absention was that it considers the resolution as applicable only to the 118 states that have joined the Convention on Cluster Munitions.

The US Department of State website (today, Dec 23rd 2016), states “The United States shares in the international concern about the humanitarian impact of the indiscriminate use of all munitions, including cluster munitions. That is one of the reasons that it spends more than any other country to eliminate the risk to civilians from landmines and all explosive remnants of war, including unexploded cluster munitions.

Cluster munitions have demonstrated military utility. Their elimination from U.S. stockpiles would put the lives of its soldiers and those of its coalition partners at risk. Moreover, cluster munitions can often result in much less collateral damage than unitary weapons, such as a larger bomb or larger artillery shell would cause, if used for the same mission.”

Legislation signed into US by President Obama in 2009 prohibits exporting cluster bombs that have a failure rate of above 1 percent. It also says the weapons cannot be used “where civilians are known to be present” and only against “clearly defined military targets.” It is hard to see how these conditions could ever be met, even harder to see how the US could sell cluster bombs to another country in certainty that they would be met.

Nevertheless, in  June 2016 Congress opted to continue selling cluster bombs to Saudi Arabia, citing a need not to “stigmatise” the weapon. It was a close vote, 216 to 204. During the House debate the Chairman of the House Committee on Defense Appropriations noted that the Department of Defence “strongly opposes this amendment” (to stop the sales) stating, “they advise us that it would stigmatise cluster munitions, which are legitimate weapons with clear military utility, and are effective weapons, providing distinct advantages against a range of targets, and can result in less collateral damage than unitary weapons.” He added that the U.S. should be encouraging countries to upgrade their cluster munition stockpiles, “rather than making it more difficult for new sales and transfers.”

The military are likely to have a different perspective than the non-military in such matters. The language of these statements seems to state that perspective clearly, even the use of the term ‘collateral damage’ when referring to those civilian casualties. Is it right to use a military perspective to defend a position that many democratic countries now find untenable?

The US seems to be shifting on this. The House vote was close. The world’s decent democracies, by and large, are signatories to the convention. The US risks finding itself on the wrong side of the decent world view.

What can you do?

If you are a US citizen, you have a voice in a democracy. Use it. Contact your representatives. Urge them to ask the US to reconsider its position on cluster munitions.

If you are a citizen of any non-signatory country, and that’s a country in which you have a voice and do not risk persecution if you use it, then use it. Contact your representative.

More than 2,000 non-Iraqi ISIS suspects detained in Syria by Western-backed Syria Democratic Forces may soon be transferred to Iraq for prosecution, since most of their countries are refusing to […]
Justice in Iraq
%d bloggers like this: