It takes about 60 seconds to drown, and it hurts.

The rescue vessel MV Aquarius ended its search and rescue operations in the Mediterranean in December. MSF described the end to their operation as the result of a sustained campaign, spearheaded by the Italian government and backed by other European states, to delegitimise, slander and obstruct aid organisations providing assistance to vulnerable people. 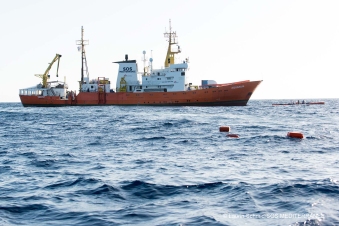 Since January, at least 340 migrants have died in the Med, but Southern Europe has hardened its heart. Cyprus, France, Greece, Italy, Malta, Portugal and Spain have just issued a joint declaration that ‘efforts to break the smugglers’ business model need to be further enhanced.’ This includes returning those rescued at sea to Libya.

Europe is also attacking individuals. In May Claus-Peter Reisch, captain of the Lifeline, was fined €10,000 by Malta which ruled that his ship had not been properly registered to rescue displaced people. Italy had rejected the Lifeline because it refused to leave the migrants in the water for Libya to find. 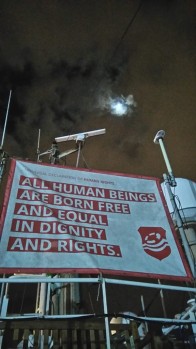 In Italy German boat captain Pia Klemp awaits trial, and could face 20 years in prison. Before her ship, the Iuventa, was impounded in 2017, she had personally assisted in rescuing more than 1,000 people. She rejects suggestions that rescuing the drowning encourages more people to attempt the highly dangerous crossing, describing those who embark as fleeing danger, not trusting to rescue, adding ‘they come via the Mediterranean because there is no legal way to get here.’ 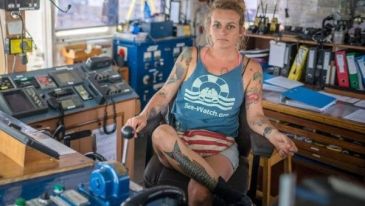 In May Italy impounded the Sea Watch 3 after its refusal to allow it to dock was overturned by the European Court of Human Rights. In early June Italy issued a decree denying rescue ships access to Italian territorial waters and threatening fines of €10,000- €50000 and confiscation of vessels.  This breaches the laws of the sea. The vessel was released 3 weeks later. On June 12th it picked up a group of 53 migrants from an inflatable raft floating in international waters. 13 were allowed ashore in Italy on health grounds but the rest, and the vessel, were left stranded at sea, less than 20 miles from the holiday beaches of Europe. Salvini had closed his doors and there was stalemate.

Italy told the boat to go to Libya. Over 60 German towns formally offered to take those on board, as did several other European countries, but Salvini would not budge. The Council of Europe’s Commissioner for Human Rights Dunja Mijatovic called for Sea Watch 3 to be assigned a port of safety, which she said Libya is not. Under international human rights law, no one intercepted by a European Union-flagged ship can be handed over to authorities where they face the risk of torture. In Libya the UN has documented terrible conditions of sexual abuse and torture in immigration detention centres. War is raging around the caged asylum seekers. CNN have exposed open slave trading. Mijatovic repeatedly stressed that the responsibility for those rescued must be divided between EU member States. Italy has taken the lion’s share of asylum seekers.

Yesterday, June 29th, Sea Watch 3 decided its refugees could wait no longer. Its captain, Carole Rackete, posted a tweet saying, ‘I have decided to enter the harbour, which is free at night, on my own.’ Then Sea Watch 3 entered the port of Lampedusa, ramming a border police boat which attempted to obstruct it in the process. Carole Rackete was arrested as the 40 refugees hugged the crew and kissed the dock. She said Sea-Watch had tried to engage with Italy, Germany, Malta and France and the European Commission, but eventually there was no other option left to ensure the migrants’ safety. 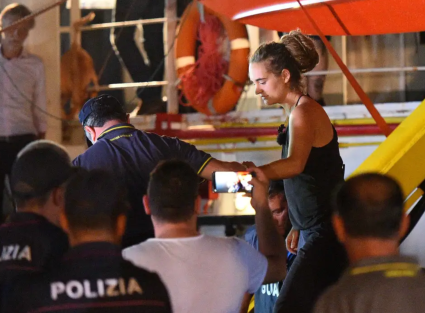 Mr Salvini responded by calling her a ‘rich, white, German woman’ who had committed ‘an act of war’. It’s not at all clear why her wealth, if she has any, or her colour, are relevant, and it says much about Mr Salvini that he thinks that they are. Nor is it clear that forcing your way past an obstruction on humanitarian grounds, particularly an obstruction without legal basis, is an act of war. SeaWatch said, ‘we are proud of our captain, she did exactly the right thing. She upheld the law of the sea and brought people to safety.’ They say that the law of the sea and several SAR conventions asks rescuers to take rescued people to the nearest place of safety. That was Lampedusa.

Europe is not on Italy’s side. France has declared that ‘the closing of ports violates the law of the sea”, Germany says “rescuing human lives is a humanitarian duty, and saving lives at sea can not be punished.’ Salvini replied: ‘Italy does not accept lessons’.

When an Italian newspaper asked Carole Rackete how she would respond to his suggestion that she was a ‘spoiled girl’ who should instead ‘help the children in Germany’ she responded: “I would say that the importance of human life is a value that we inherited from the great Greek and Roman thinkers… we should not be used in political games.’

More than 2,000 non-Iraqi ISIS suspects detained in Syria by Western-backed Syria Democratic Forces may soon be transferred to Iraq for prosecution, since most of their countries are refusing to […]
Justice in Iraq

When might we draw the line and refuse to supply weapons to another State? Egypt might be a case for consideration. For the last 6 years a war has been […]
Weapons to North Sinai
%d bloggers like this: