Turkey has now launched its offensive against the Kurdish Syrian Defense Forces in North East Syria, days after Donald Trump called President Tayyip Erdogan then tweeted that US troops would withdraw from the region. After signing the executive orders he told reporters that the Kurds ‘didn’t help us in the second world war, they didn’t help us with Normandy as an example – they mention the names of different battles, they weren’t there.’

Twitter users have fallen over themselves to point out the role of the Iraq Levies, an Allied WW2 force largely composed of Assyrian, Kurdish, Armenian, Turkman and Yazidi soldiers. By 1943 its strength stood at 44 companies, ten of which were Kurdish. Its 1st Parachute Company, 75% Assyrian and 25% Kurdish, was attached to the Royal Marine Commando and served in Albania, Italy and Greece. This contrasts remarkably with Trump’s own history of military service – and indeed Turkey’s. Turkey remained neutral in WW2 until February 1945, when it finally entered the war on the side of the Allies. No Turkish troops ever saw combat. It is not clear, therefore, that Trump’s new foreign policy of defending only those who fought with the US eighty years ago is entirely consistent with his actions.

As to why Turkey is marching into NE Syria, we only need to look at the facts. Kurds make up about ten percent of Syria’s population, around 1.9 million living mainly in the North East. Syria persecutes Kurdish human rights activists, bans political parties and the Kurdish language, and children and businesses cannot be registered with Kurdish names. Three hundred thousand Syrian Kurds don’t even have citizenship, for historica reasons. They are effectively stateless, confined to Syria. This is why Kurdish forces are fighting in this particular part of Syria, rather than any other. 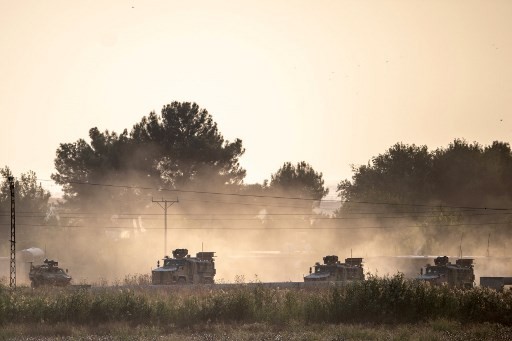 The Kurds have been faithful allies against ISIL. They appear to have fought hard and at considerable cost, tackling ISIL on the ground.  They appear to fight bravely and honourably. But the Kurds and their political wing the Kurdistan Workers Party are tarred, for Turkey, by association with the PKK, a Kurdish militant organization which has waged an armed struggle since 1984 asking for rights and self-determination within Turkey. Since that the conflict began, more than 40,000 have died, most of them Turkish Kurdish civilians. Turkey sees the PKK as a terrorist organisation and it is true that it has resorted to violence. Turkey’s military allies (the US, the EU, and NATO) consider it a terrorist organization. The UN, interestingly, does not. Neither do several other countries including India, Russia and Switzerland. Nevertheless Turkey uses the PKK as an excuse to target all politically active Kurds,

About 20 million Kurds live in Turkey, mainly in the South East. They are also subject to repression and intimidation. Kurdish asylum seekers who have been detained by Turksih security forces for suspected Kurdish activism of any kind show the psychological and physical evidence of dreadful beatings, broken teeth, broken bones, broken feet, rape with truncheons, electric shocks, waterboarding, humiliation and the all-present threatof being pushed, blindfolded, from the top floor. They say many are pushed, designated as suicides in custody.The European Court of Human Rights has repeatedly condemned Turkey for these executions, torture, arbitrary arrests, and murdered and disappeared Kurdish journalists. In 1994 Nelson Mandela refused the Ataturk Prize because of Turkey’s treatment of the Kurds. It hasn’t substantially improved.

All these means that as Erdogan sets out to deal with the Kurds of NE Syria we only need to look at how he deals with the Kurds of Turkey if we want to understand his intentions, and the philosophy beneath them. Trump has cleared the highway for the eradication of a reservoir of cultural Kurdishness and Kurdish dreams of nationalism that Turkey regards as a threat. More importantly, those who might one day want to fight for those Kurds against Turksih suppression and human rights abuses are conveniently gathered in one place.

The YPG fought with the West against ISIL. Now they stand alone. The West must watch carefully, and hold Turkish forces to account. We cannot stand by and watch people suppressed, imprisoned or even massacred because they are Kurdish. There must be certainty in the mindsof every Turkish soldier that there is no impunity for war crimes.

As John Stuart Mill said in ‘On Liberty,’ A person may cause evil to others not only by his actions but by his inaction. We cannot abandon our friends just because others abandon them.

More than 2,000 non-Iraqi ISIS suspects detained in Syria by Western-backed Syria Democratic Forces may soon be transferred to Iraq for prosecution, since most of their countries are refusing to […]
Justice in Iraq

When might we draw the line and refuse to supply weapons to another State? Egypt might be a case for consideration. For the last 6 years a war has been […]
Weapons to North Sinai
%d bloggers like this: